A few weeks ago I was thumbing through my phone’s Facebook feed as I am wont to do when wasting time and came across something called… ‘Dancing in the dark’.

I shared it to my own feed, wondering what it was and friends from other places in Australia immediately responded – explaining it’s essentially an ‘exercise’ class which involves freestyle dancing around a darkened room.

Before moving to Hervey Bay I was addicted to a class at my gym I called faux Zumba. I adored this class and my instructor Nikki. So much so I’d head into the city to go if I had a day off work. Les Mills gym-goers might recognise it as something akin to Body Jam or Sh’bam.

On moving to the Fraser Coast I checked for similar classes but could only find the usual Zumba options.

So… the notion of ‘dancing in the dark’ was kinda alluring. Not to mention scary.

I kept harping on at my learned friends. (Control-freak that I am!)

“So we just dance however we want?”

“For an entire hour?”

Friends I went dancing with in the 1990s attested to its fun-ness…. so I figured I might as well give it a go. I’ve been trying to work on my fitness and while I’m now going to Ocean Tree Yoga Studio twice most weeks, I’m struggling with cardiovascular exercise.

The classes kicked off on Thursday 9 February at The Studio in Maryborough – which also plays host to yoga, pilates and now barre classes.

I have to admit I changed my mind 20 times the day I was due to go. I felt unwell. I wasn’t in the mood. I couldn’t be arsed driving from Hervey Bay to Maryborough. And (in all honesty) I had no bloody idea what to expect and was a tad nervous.

However… I compromised and decided to go to my mother’s (in Maryborough) for the night. And, of course once there guilt kicked in, so about 30mins before the class was due to start I threw on some gym gear and headed off.

Chelsie – one of the yoga instructors greeted me and explained the person who had organised the classes was no longer involved, but they decided go ahead nonetheless.

I was thankful to see some other nervous faces arrive… all excited but unsure what to expect.

There were 6 of us in total in the end and IT WAS INCREDIBLE!

I thought I’d feel self-conscious and I might have for a minute or so, but it’s a bit like being at a club. Unless you go bounding into someone’s space you mostly ignore each other and do your own thing.

It’s dark so while you can kinda ‘see’ each other amidst the darkness and disco lights you don’t feel as if you’re on show.

And you really CAN dance however you bloody want. I thought I’d just do some do side-to-side naff shoo-bop-type movements…. given I’ve been ‘out’ dancing once in the last decade and it’s over 4 years since my faux Zumba classes but before I knew it I was bouncing about to the Black Eyed Peas… (And yes, even without alcohol to lubricate my funky moves!)

A bit of Madonna and I would have had some flashbacks to Maryborough’s Royal Hotel (aka Muck-hole) circa 1980s and 1990s.

Chelsie said she’s still working on the music and asked what those of us there liked. I said I was partial to some 80s and 90s stuff and top 40. I should have mentioned some of my old faves from faux Zumba, like Nicki Minaj and Lady Gaga and so forth. But last night we had a bit of everything from 1D to Oasis to hip-hop etc…

As we’re in the middle of a heatwave in Queensland and the room’s not airconditioned it was pretty bloody hot. But that was okay. We were all ready for it and felt like we’d had a good workout after.

Shoes are optional, but as there are tiles we decided it was probably better for our joints if we kept them on as the floor would get hard if you were leaping about energetically for an hour. 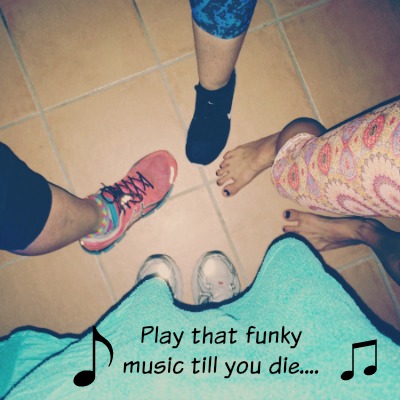 Some of us doing an end-of-class footsie. An ‘after’ shot of our sweaty faces wasn’t an option. 🙂

The time passes surprisingly quickly. We just grabbed a drink of water whenever we needed it and kept going. I was surprised as I’m pretty unfit and thought I’d need to take a break or two but I just reined in my jaunty and much-admired moves (!!) when I needed to.

So, all in all, I had a great time and am looking forward to more next week.

Dancing in the Dark is held at The Studio, at 4/71 Wharf Street in Maryborough on Thursday from 7-8pm and costs $7/person. Find The Studio on Facebook or call 0429 967 628 for information about the classes or others on offer.

I should mention it took all of my willpower not to make a Bruce Springsteen / Courtney Cox reference during this post. Mainly cos I thought readers might be too young to get it.

Would you try ‘dancing in the dark’?

4 thoughts on “Dancing in the dark”