The inaugural Hervey Bay Food and Wine Festival took place on the weekend – a two-day event held in the Pier Park at Urangan.

I was keen to attend (as I live near the Pier Park where it was held) but prevaricated a little. On one hand I like to try to support local events and – well… wine, music and food – what’s not to love? On the other hand, I’m a bit festivalled-out.

I gather (from talking to friends and family) that others feel the same. There have been A LOT of big events packed into the last six or so months here on the Fraser Coast: Relish, Mary Poppins Festival, Craft Festival, Whale Festival and the Seafood Festival.

In the last month alone in Hervey Bay, we’ve had the Pier Festival, 150th birthday celebrations, Tour de Bay and now the Food and Wine Festival. On top of that we’ve got the Beerfest,  Torbanlea Races, Maryborough Open House and Melbourne Cup celebrations in the next month. To cap all of that off, there’s my one-year-back-on-the-Fraser Coast-anniversary! (Obviously a cause of celebration. Or national holiday or similar! 😉 )

I know (from the Festival’s Facebook page) that the $15 entry fee turned a lot of people off. I understand the need to charge a fee: but Relish was $10 – and included a lot more activities for your money; and the Seafood Festival was $5.

I don’t go out a lot however, so was prepared to pay the entry fee and went along for a few hours on Sunday.

On a positive note, the entry fee meant that the festival probably attracted a different crowd to those who usually attend local markets or pub events (ie. no one was likely to get wasted and vomit on you or yell obscenities at the band).

I hadn’t known about the event until just a couple of weeks before it was held, so I’m not sure how far ahead it was planned. I know the organisers were still working on the music the week before the festival – so I was worried about what I’d find, however… I was pleasantly surprised.

I understand there were a few hiccups and organisers hope for bigger crowds in future, but in essence the event seemed quite successful – for we festival-goers anyway!

There were more wine-tasting options than I expected (though I know some would have liked to see more local wineries). And the ability to buy a glass/bottle of wine or champagne (or beer etc) to enjoy on the day was great.

After my disappointment at the Migaloo Starlight Swing, I was happy to know that there’d be a few food options and indeed Aquavue was on hand serving some salads (my friends partook in a prawn and mango salad with orange and mustard dressing which was apparently yummy); Wild Lotus offered up a steak sandwich that was much more – deliciously tender beef on sourdough etc. My friend who hates steak sandwiches, RAVED about the beef. Bayswater Hotel was serving antipasto platters and a squid salad; and there were pizzas and pancakes as well as coffee vans. (Something for everyone – though as a non-salad-eating coeliac – I struggled a little.) 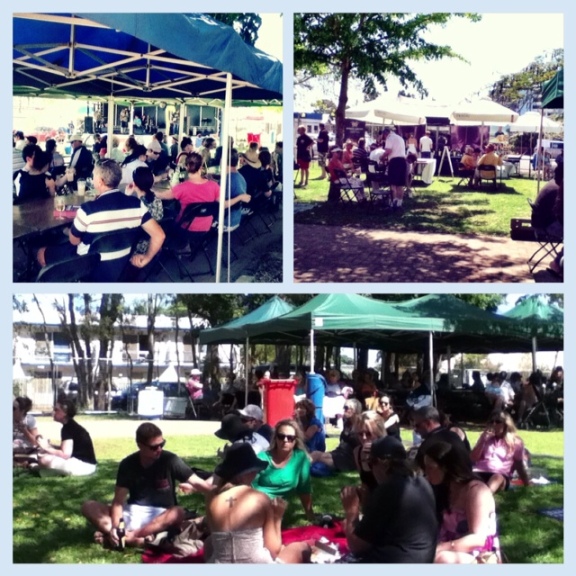 I was also pleasantly surprised by the music. The acts had a bluesy feel and I was a tad tempted to hang around longer than planned to kick back, partake in more champers and enjoy the atmosphere.

Happily undercover seating was provided and as the day wore on there was heaps of shade for those who’d brought blankets or their own chairs.

I’d definitely go back, and I know organisers are thinking of running the festival again, but I do wonder if it could be paired with something else rather than being yet another separate event. And – feedback will be interesting – but organisers may also want to look at the cost in future years.

Did you attend, or did (or would) the $15 entrance fee put you off?

Today, along with 45 million other people, I ventured along to the Hervey Bay Seafood Festival. (Yes okay…  I may be exaggerating. A little. There were only 35 million.)

I had such an amazing time at the Relish Food and Wine Festival I was quite excited by the prospect of one of the Whale Festival‘s premiere events – and it didn’t disappoint.

Of course I don’t really eat seafood, which is kind-of a bummer when you are attending a seafood festival – but in this case it didn’t matter.

Festival admission cost $5 for adults (free for kids) and it had something for everyone with free kids’ activities as well as some jumping castles and the like. My friend’s little boy was delighted with a balloon creature wound tightly about his wrist lest it drift off into the ether.

I wasn’t sure how three stages would fit into Fishermen’s Park but it somehow worked with the main stage (very loud and very popular) along with cooking demonstrations and a smaller stage with more *ahem* refined music (at least while I was there). 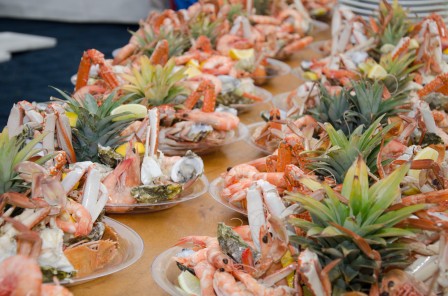 The Tastes of the Bay dinner booked out quickly and everyone I glimpsed inside the tent seemed to be enjoying themselves.

Not to be outdone, my friends and I partook in a frozen margarita drink – perfect given how bloody hot it was.

We were all Seafood Festival virgins, so unprepared for the crowds. Unlike Relish where food and drinks could be consumed anywhere, the area in which alcohol could be consumed was more limited (which was a bit of a shame) and with chairs and tables taken long before, we stood about uncomfortably to scoff our very-welcome drinks.

Without our own seating or rugs it was a bit difficult to just ‘hang around’ and the queues at most food stalls meant we decided against eating there.

We did order some wine from Kingaroy’s Crane Wines who were again popular and I’m already anticipating the arrival of some sparkling shiraz in coming days or weeks.

I’ll definitely head along to the Festival next year, although I will be more prepared (having had my Seafood Festival-going cherry popped this year). Getting in early to find  a ‘base’ or taking your own chairs / table / rugs seems sensible and would permit you to get comfortable and stay longer. Of course, booking early to get to the Tastes of the Bay lunch could also be ideal for seafood lovers.

I love that so many locals and visitors (alike) turned out to support the Festival and now eagerly await the remaining Whale Festival activities.

I hope other attendees had a fabulous time and will be back again next year!