I have very fond memories of the Urangan sea wall. As kids my brother and I would sit on the wall and let the water splash over us, or jump into incoming waves.

Until recently it was almost impossible to imagine such scenarios. The tide barely made it to the bottom steps of the wall, let alone offering up enough water to leap into without doing oneself an injury.

In October 2012 when I was looking at the apartment that was to become my home, the Real Estate Agent told me that the Fraser Coast Regional Council was planning to fix the sea wall (which was looking a little worse for wear). I knew it meant I’d have to suffer through some noise and disruption, but was basically pleased the iconic wall would remain.

I had a big moan however, when the Fraser Coast Regional Council finally started work on the Urangan sea wall back in December.

“Why on earth would you block off part of the esplanade at one of the busiest times of year?” I wondered. Aloud. And in a ranty way.

Unsurprisingly no one listened and work commenced a few weeks before Christmas.

As someone who lives across the road I’m trying to be patient. And sympathetic. And patient. (Oh, did I mention that?!)

BUT IT HAS BEEN BLOODY NOISY! From my expert eye I’ve noticed worker using a jack hammer to dig up the old wall; a big drill-thingy to dig holes in the concrete for the new wall supports; chain saws to presumably chop up the old wall; as well as many other noisy implements.

When all are unleashed at the same time it’s a nightmare for those trying to sleep work across the road.

But, I’ve tried to bear it bravely with only minimal (*ahem*) moaning and groaning. 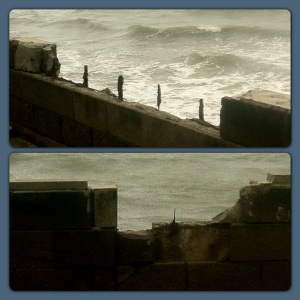 The wall already needed replacing before the advent Cyclone Ossie (I’m allowed to call it that as we go way back!) and its wild winds which washed* concrete bricks out of the old wall.

I’m not overly sure that the new wall is the most aesthetically pleasing one that could have been chosen, but… that’s all water under the bridge (or over the wall).

I’ve seen no point in whingeing to the Council workers out there doing their job about the noise. Not when I can moan and groan on Twitter instead.

And – weather permitting – another month or so the noise will be a distant memory; I will again have my gorgeous ocean views (sans ugly fencing and road barriers) and – hopefully – the next Cyclone or high tides won’t result in chunks of the wall floating across the road.

Do others have fond memories of the sea wall, I wonder?
Or perhaps you’re as frustrated as I am about the disruption. (Albeit a necessary one!)

* apologies for the accidental alliteration. But now it’s there, it’s staying!