My niece skipped over the obligatory Wiggles and High Five fetishes as a kid and went straight from Play School to musicals – at age 2.

Her favourite back then was Mary Poppins, or Poppins; which she tweeted cutely (in the days before Twitter when tweeting meant something else entirely).

We’ve got pictures of her at my parents’ place, drawing chalk pictures on the path; and years later I accompanied her and my SIL to a Mary Poppins Sing-a-long movie. Yes… such things do actually exist.

Her MP-fancy was kinda apt as it eventually came to light that the author of the original tale (penned in 1934), PL Travers, was actually born in Maryborough. Yes, the one on the Fraser Coast.

Maryborough-ites, always happy to be known for something other than  ship-building have latched onto this claim to fame, with a bronze statue erected in 1995 and an annual Mary Poppins Festival.

I must admit I was a tad ‘meh’ about the festival – as a non parent – but have only just seen the program of activities and feel obliged to eat my words. Or at least, regret my apathy (and antipathy!).

As usual the festival includes the day-long event in Queens Park and Portside (on Sunday 30 June this year); but it also features so much more!

Firstly, there’s the Heritage City Art Festival in the Maryborough City Hall which includes workshops and culminates in sidewalk art at the festival itself.

The usual Maryborough Market Day on Thursday 27 June is being transformed into a Mary Poppins Market Day, complete with peeps in costumes and children’s rides and the like.

There’s pop-up music being featured at cafes and pubs around town and a Musical Showcase in early July with a range of special guests.

A Mary Poppins High Tea will be held at Muddy Waters Cafe on Saturday 29 June and – of course – it’s actually possible to have Tea with Mary at other times of the year.

And… my fave bit of all and something I’m super keen to get to: Vintage Styling sessions.

Stylists from NZ designer Annah Stretton are holding two evening styling sessions and will provide some ‘what to wear’ and ‘what not to wear’ advice, presumably without the nastiness which comes with reality TV shows in that vein.

If, however, you can’t make either of those there’s a Vintage Pop-Up Salon at the festival and a chance to learn about manners, etiquette and poise. (Note for parents, that this includes an opportunity for children to learn ‘the art of table setting’…. so – for your own sake – you might want to make sure they partake!)

The full program for the Sunday festival is available but again there’s something for everyone, from the styling sessions to kids’ activities, puppetry, bands and other entertainment (though I may be giving the ‘reptile show’ a big miss) and food galore.

I’ll see you there!

PS. Did you know that Mary Poppins actually featured in a series of books by Pamela Lyndon Travers (b. Helen Lyndon Goff), written between 1934 and 1988?!

A couple of weeks ago my blogging and real-life buddy, KangaRue and I had the good fortune to attend Relish Food and Wine Festival at Portside in Maryborough. 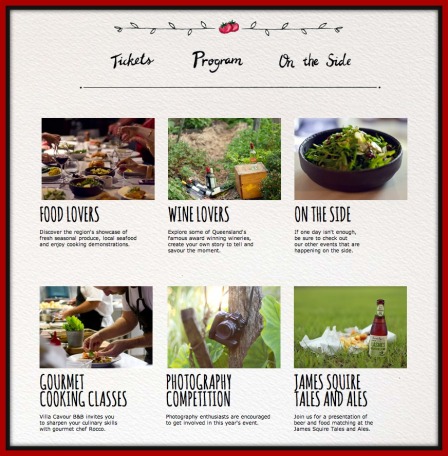 Sadly I didn’t get to any of the other events: The Gourmet Cooking Classes with Villa Cavour B&B; Coast Restaurant’s Wine and Food Degustation Lunch; The Howard Park Degustation dinner at Muddy Waters; or the Banyan Bubbly Breakfast.

We both, however, lapped up everything on offer at the day-long festival itself.

KangaRue and her friends arrived earlier so had already attended some cooking demonstrations;  partaken in some wine tasting; and started the Dan Murphy Food and Wine appreciation session when I caught up with her.

My grandfather (aka Poppie) worked at the Bond Store back in the days it housed barrels of booze, so it seemed apt that James Squire Tales and Ales (beer and food matching) and port and liqueur tastings were on offer there.

A heap of local cafes and food stalls were on hand and a myriad of wineries offering tastings. I was won over by a Crane Wines Sparkling Shiraz – procuring the last two bottles! (I should note that they do deliver, as do many of the other smaller wineries participating in the event.)

I didn’t venture into the XXXX Gold Mini Retreat but it looked to be doing a good business and I loved that you could wander about with your beer or wine from stall to stall or simply sit at a table and lap up the atmosphere and entertainment.

Early rain didn’t deter crowds and I was impressed at the constant throng of people milling about. There was a $10 entry fee (for adults) which also didn’t seem to discourage locals and visitors alike.

With the Mary Ann steam train, kids activities, music and the Relish photo exhibition (and competition) at Gatakers Artspace, there was something for everyone. 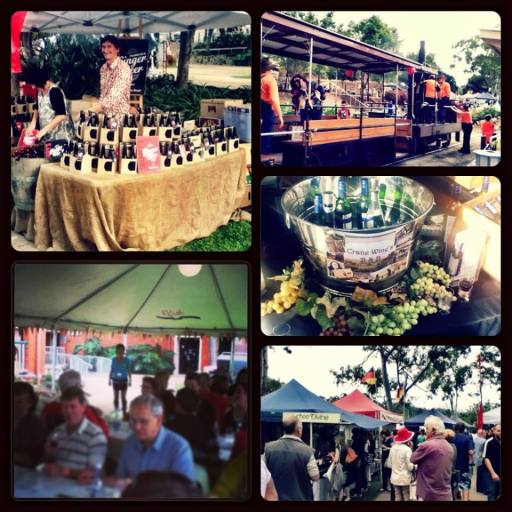 As someone who grew up in the borough (as a friend calls it) I love that these kinds of activities are now available. I only wish that – as a teenager growing up in regional Qld in the 1980s – I’d been exposed to similar stuff back then.

Congratulations to all involved. I was very impressed with the activities on offer and the quality of all of the promotional materials and publications. And I will DEFINITELY be making an effort to attend more festival activities next year.